This year the wedding fever is not only limited to Bollywood but has spread to the television industry as well. Earlier this year, couples including Rubina Dilaik-Abhinav Shukla, Milind Soman-Ankita Konwar, Dipika Kakar-Shoaib Ibrahim got married, and a few others announced their wedding plans, the bug has now bitten the ‘Ishqbaaz’ actor. It is Additi Gupta who recently got engaged in a private ceremony The actress recently got engaged to her beau Kabir Chopra in a hush-hush engagement and shared one picture on her Instagram page. The actress was wearing a greenish-grey Indian attire while Kabir was wearing a purple coloured ‘kurta’. And looking beautiful, she also shared an Insta story

Many celebrities wished the two on their special occasion. But Social media sometimes became so cruel and this time Some of the Fans of Additi keep commenting on Photos with so much hate and trying to troll Additi

Here are the comments 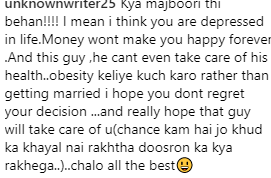 Divyanka Tripathi Finally Celebrates Rakhi With Her brother, Pics Inside