Everyone started wondering when they will get to see her on the silver screen. Though Mira doesn’t belong to the industry, her public appearances and interviews manifest her magical aura, which confirms that she is a star in the making

Can’t wait to use my new OnePlus 6 Silk White! Looks stunning and can’t explain how silky smooth it feels in your hand 😍 Want to get your hands on this? Follow @oneplus_india right NOW and stay tuned to their latest updates!

she is a star herself courtesy, her acting debut. Mira unveiled her first ever television commercial for Olay skincare products and talks about her experience of being a mother, who doesn’t get time to take care of herself

Mira took Instagram to share her Video Mira wrote, “Being a mother doesn’t mean you stop being yourself right? I took the #Olay #SkinTransformation #28Daychallenge Here’s my #Reborn story.. what’s yours? @olayindia”. Mira, who is pregnant with her second child and is in her last trimester, looked radiant in her black dress and high heels.

Being a mother doesn’t mean you stop being yourself right? I took the #Olay #SkinTransformation #28Daychallenge Here’s my #Reborn story.. what’s yours? @olayindia

Shahid Kapoor commented on her post, “Who’s this stunner”. Her close friend, Shilarna Vaze too commented on the post, “So pretty!!!” In the video, Mira talked about the changes that their first-born Misha Kapoor brought into her and Shahid’s lives. She shared, “Being a mother, it’s beautiful. I still remember holding Misha in my arms for the first time. It was magical. It brought Shahid and me even closer. I have always been a very hands-on mom, so you tend to forget yourself as a woman. The stress the sleepless nights, my pregnancy glow just vanished. My skin became dull and patchy. So, when Misha’s birthday was just a month away, I knew I had to do something.” 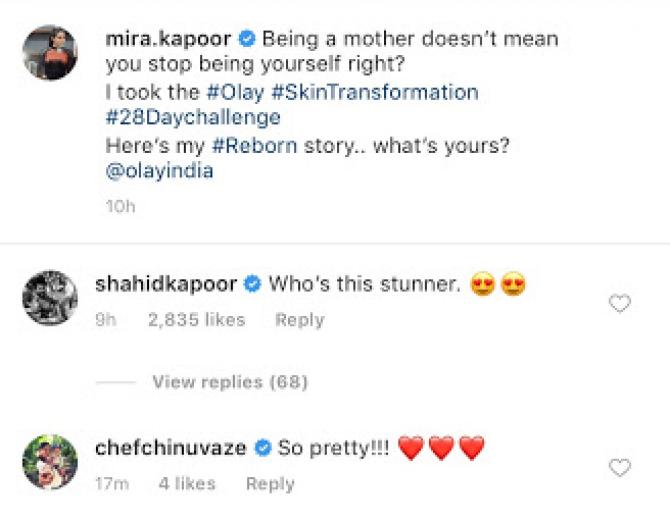 In an earlier interview with DNA, Mira opened up about having another baby and then think about pursuing her career. The 23-year-old Mira was quoted as saying, “Mira, who is just 22, would prefer to have a second kid soon as well. She wants to flip the norm, get the kids to a certain age and then be free to do what she likes.”

If you can discipline yourself and follow some tips, there are no hurdles in having time for studying, social life and personal issues