An anonymous wife from outside Syracuse is trying to find the woman sleeping with her husband. To warn her.

The guy sounds like a bag of garbage, and his wife wants whoever the Other Woman is to know she’s in for some deep sh*t if she goes any further with this guy. The Wife posted a long open letter to Craigslist. 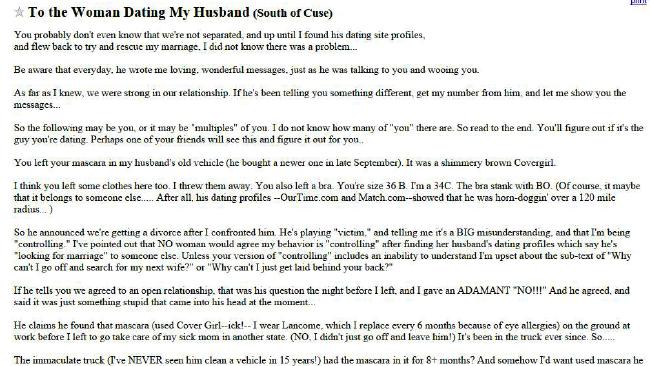 To the Woman Dating My Husband (South of Cuse)

You probably don’t even know that we’re not separated, and up until I found his dating site profiles, and flew back to try and rescue my marriage, I did not know there was a problem…

Be aware that everyday, he wrote me loving, wonderful messages, just as he was talking to you and wooing you.

As far as I knew, we were strong in our relationship. If he’s been telling you something different, get my number from him, and let me show you the messages…

So the following may be you, or it may be “multiples” of you. I do not know how many of “you” there are. So read to the end. You’ll figure out if it’s the guy you’re dating. Perhaps one of your friends will see this and figure it out for you..

You left your mascara in my husband’s old vehicle (he bought a newer one in late September). It was a shimmery brown Covergirl.

I think you left some clothes here too. I threw them away. You also left a bra. You’re size 36 B. I’m a 34C. The bra stank with BO. (Of course, it maybe that it belongs to someone else….. After all, his dating profiles –OurTime.com and Match.com–showed that he was horn-doggin’ over a 120 mile radius… )

So he announced we’re getting a divorce after I confronted him. He’s playing “victim,” and telling me it’s a BIG misunderstanding, and that I’m being “controlling.” I’ve pointed out that NO woman would agree my behavior is “controlling” after finding her husband’s dating profiles which say he’s “looking for marriage” to someone else. Unless your version of “controlling” includes an inability to understand I’m upset about the sub-text of “Why can’t I go off and search for my next wife?” or “Why can’t I just get laid behind your back?”

If he tells you we agreed to an open relationship, that was his question the night before I left, and I gave an ADAMANT “NO!!!” And he agreed, and said it was just something stupid that came into his head at the moment…

He claims he found that mascara (used Cover Girl–ick!– I wear Lancome, which I replace every 6 months because of eye allergies) on the ground at work before I left to go take care of my sick mom in another state. (NO, I didn’t just go off and leave him!) It’s been in the truck ever since. So…..

The immaculate truck (I’ve NEVER seen him clean a vehicle in 15 years!) had the mascara in it for 8+ months? And somehow I’d want used mascara he found on the ground? And he saved it, even when cleaning up the truck?

I haven’t even mentioned the bra to him. (What’s the point?)

Your bag of clothes that you washed inside out: He tried to stop me from throwing some women’s and children’s clothes away that I found in a bag in the garage, claiming they belonged to our friend M’s nephew… (there were some boys clothes, some small girl’s clothing, and woman’s… so I call BS on that! btw….Nice tastes in shirts. I like Ralph Lauren plaid, too, but you appear to be a bit bigger than me….) he glummly shut up when I cheerily reminded him that M’s nephew has grown, so any of the clothes would be out grown.

Well, recently he’s lost weight, quit drinking (that was 15 years of h*ll for me and the kids) bought himself a NEW truck (without consulting / asking me). But guess what? That nice house and property you saw, and new truck, and all his new tools? ***I OWN HALF OF ALL OF IT***.

So you won’t be living in my nice house, we’ll be selling it. And he may not have mentioned all my grad school debt… We’ll be splitting that as well. So guess what you have???

You, my dear, are the proud new doormat for a middle-aged man who has been a contractor-type all his life. He’s fairly smart though, but at 56 his body will not hold out much longer, and he’s doesn’t have a wide skill-set. He’s somewhat heavy-set, pretty good looking, but he will not be wealthy after we split things (nor will I).

Congrads! He’s quite the catch! (Well, it looks that way from the outset, now, before the divorce) My prediction though is that he’ll have to move into a little apartment he can afford. (I don’t think he thought all these consequences through. Somehow, in his mind, I’d just disappear and leave him with you, the house, the toys, and the assets?)

Oh, and you’ll have my dogs, too. They were a present for us from me, and I trained them for a year… but since they’re purebreds, guess what? THEY’RE PROPERTY WITH AN ATTACHED VALUE!!!! My guess on their value: They’re worth about about $3K. Thank you very much!!!! I’ll take something of equal value, like the TV, generator, fridge and some of those nifty new tools!f

Now, you may have kids (since there were ice cream cones in my pantry and sugary cereal and milk left at the house–I’ve never seen him eat that crap, ever, in 15 years. btw. The milk went bad. I threw it out. You bought it at Tops in Cicero one evening in late August. I found the receipt. You bought all that weird crap in one evening, after the trip to Fun Junction and the return to the house.) so, if you have kids, you should know that he has a tendency to over-buy stuff and send the family into debt. There were a few years (before I graduated from grad school) when I had to go to food banks to keep our kids fed. Good luck with that. I’m sure he’s changed, although judging from new toys he’s bought… maybe not so much.

My advice: Don’t marry him. If you do, then HALF OF YOUR STUFF IS HIS! He’ll use you up, he’s a selfish lover, he’s a spend-a-holic, and it’s likely he’ll revert to booze. His financial decisions will drive you into bankruptcy. (He’s done it twice) His family will hate you (they’re weird, you’ll see), and he has a tendency to do incredibly stupid stuff. Like the type of stuff that will **get YOU in trouble** even though you have no control over his actions/behavior! he’ll get mad because you “nag” and say stuff like “Don’t drive to work drunk and get in a crash!”

Of course, since you’ve been boffing my husband, and you must know I am still in the picture (my stuff is ALL OVER THE HOUSE) …OR… you may just be incredibly stupid…

Maybe you deserve him.

You and he ruined my life, stole the life I spent 15 years trying to built with him, destroyed my identity… I wish I could say I “wish you the best,” but it’s more like “I think you’re about to get what you deserve.”

FYI: He has a purplish (old vehicle) and a new (used) white one. My (our) two dogs are large, gorgeous, “matching” in looks and well behaved. His sister, whose first name starts with “C” has an @ss you could park a Peterbuilt on! We (I) own a gorgeous property with a stream and pond, out in the woods. (That should help for identification purposes!!!)

He went to Fun Junction (btw, he took all the Fun Junction coins I’d saved for sentimental value from when the boys were little–thanks. You stole my memories of my happy days with my children). You googled the address for Fun Junction from our house computer (he hates google and only uses bing), then according to his phone he drove there. Later, you two stopped at Tops in Cicero, bought ice cream cones and sugary cereal (and cheap wine coolers…. eeeewwwww) and you returned to the house. Then YOU googled 15 minutes worth of YouTube videos on “La Lupe”–some kind of weird Cuban singer from the 60s and 70s. You actually put him through 4 videos and 15 minutes worth of that!!!! Hahahahahahah!!!! He had to have been cringing inside, because (and here’s a little secret), I liked Salsa until I met him–and he HATED it so much, I gave up ever listening to it…. I wish I could have been a fly on the wall for that one! Pfft. What a guy will go through to get laid….

If you’re a real, actually nice person, that has been duped, just know that he’s gotten very good at lying. He’s a lot of fun. He’s a great cook, and a great talker…And he’s not single, he’s just trying to get laid. Or worse. He’s courting you as the next Mrs., knowing that our divorce will leave him very, very financially screwed. And you, my dear, are lookin’ to him like his life boat. Get out while you can.

GOOD LUCK WITH HIM! THE PACKAGING IS DAMAGED AND WHAT’S INSIDE IS PRETTY SPENT, TOO!