Each and every person is having selfie fever and we can’t deny this fact! And our B-town stars are also in the same league. It is the new way of giving autographs and love to their fans. But our super energetic Varun Dhawan got trapped in this selfie game and was charged the fine by the Mumbai Police. 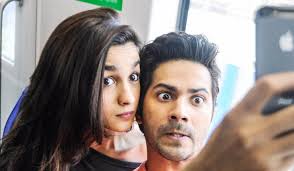 He clicked the selfie with his fan. A fan saw him in the car and wanted to get clicked with him and poor Dhawan didn’t wanted to hurt his female fan. So, he leaned out of the car window and got clicked with the lady. Mumbai Police was not at all happy with this act. So, they tweeted, and warned Dhawan that he shouldn’t be risking his or anyone else’s life. Dhawan was charged with fine:

.@Varun_dvn These adventures surely work on D silver screen but certainly not on the roads of Mumbai! U have risked ur life,ur admirer’s & few others. V expect better from a responsible Mumbaikar & youth icon like U! An E-Challan is on d way 2 ur home. Next time, V will B harsher pic.twitter.com/YmdytxspGY

However, Dhawan tweeted and clarified his point that. He also apologized for his mistake.

My apologies 🙏 Our cars weren’t moving since we were at a traffic signal and I didn’t want to hurt the sentiment of a fan but next time I’ll keep safety in mind and won’t encourage this. https://t.co/MEJk56EksG

We love the way Varun showers love on his fans but he needs to obey the laws also!

the positive thing was that no one was harmed during the act!