It’s often thought that an active lifestyle and regular sport and exercise are the keys to living a long life and keeping yourself in good health. But Dr. Peter Axt, a retired professor of health science, and his daughter, Dr Michaela Axt-Gadermann, a family doctor, argue in their book The Joy of Laziness that scientific evidence disproves this commonly held assumption.

They say that everybody has a limited amount of ’life energy’, and that the speed with which it is consumed determines their life span. Therefore, high-energy activities accelerate the ageing process and makes the body more susceptible to illness.

Of course, a healthy lifestyle won’t do anyone any harm, but even in this case it’s important to know when not to overdo it. Their fascinating arguments reproduced below will help you better understand this surprising revelation. 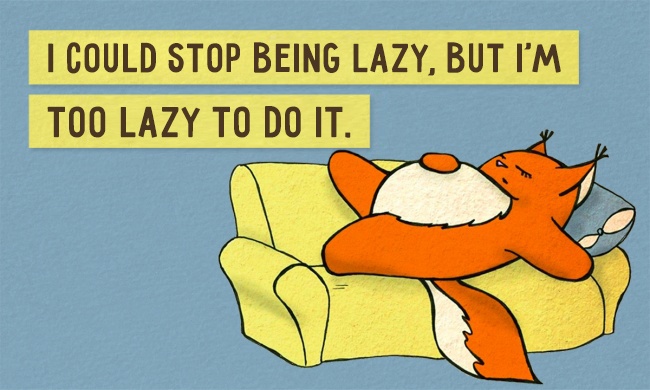 Are you convinced that you need to push your body to its physical limits every day in order to stay as healthy as you were when you were young? Do you believe a daily jog will protect you from a heart attack? Well, numerous pieces of contemporary research actually challenge your assumptions here.

Ever since the Greek messenger Pheidippides, in 400 B.C., ran the 26.16-mile stretch from Marathon to Athens and ultimately collapsed, dead, in the marketplace, there has been an ongoing debate over the point (or pointlessness) of excessive athleticism. A somewhat outdated study gave the fitness craze strong support. About 25 years ago, a US doctor named Ralph Paffenbarger began a study on 17,000 Harvard graduates. He determined that the risk of heart disease sinks dramatically when you burn an extra 2,000 calories per week through physical activity. From that point on, millions of people exerted themselves on treadmills, squash courts, and in fitness studios, trying to burn off the magical 2,000 calories.

Unfortunately, whenever the study was cited, it was not mentioned that the Harvard subjects didn’t burn the calories by just exercising, but mostly by climbing stairs, gardening, and doing other similar moderate-intensity tasks. it was also forgotten that Paffenbarger saw health improvements after the subjects had burned only 500 extra calories per week, a fact that would make the frantic overexertion of many fitness enthusiasts completely unnecessary.

Is the fitness craze worthwhile?

How much do you think you can lengthen your life by exercising several times a week after the age of 20? Will your hard work gain you five, six, eight, ten or more years? You’ll be amazed — a lifetime of athletic activity can lengthen your life by just two (!) years. Living two years longer is certainly a fine and worthwhile goal. But Dr. D.B. Jacoby, an American heart specialist, has calculated that the time you spend to reach this goal — on the treadmill, at the gym, or in the tennis court — also equals at least two years! This relativizes the benefit of the extra years.

If you enjoy exercising, the time is certainly not wasted. But if you’re a couch potato and are only torturing yourself in order to stay healthy and live longer, then you should consider whether or not the effort is worth it for you. After all, exercising at the gym is not the only thing that’s good for your health. Even moderate ‘everyday’ exercise like gardening, walking the dog, washing windows, or climbing the stairs is enough to stay healthy and fit.

If you apply the life-energy theory, hard physical exertion is just a waste of valuable energy reserves anyway. And the fact that there are very few former high-performance athletes over 80 who are still healthy, mentally active, and productive should give obsessive athletes something to think about. On the other hand, there are countless examples of elderly people who have never done any exercise or have even avoided it.

The best known opponent of exercise is probably former British Prime Minister Winston Churchill. He is known for the famous saying, ‘No sports’.

The mother of the current Queen of England, moreover, surely never broke a sweat playing sports in her life. But in the year 2000 she celebrated her 100th birthday.

Exercise is clearly no guarantee of good health and a long life. About 25 years ago, a sportswriter named James Fixx infected Americans with running fever with his bestseller The Complete Book of Running. At the time, Fixx was known as the King of Fitness.

Millions of Europeans followed his advice and tried to stay productive and healthy by running. The books author set a good example, and even at the age of 50 he jogged about 60 miles a week. James Fixx died of heart failure at the age of 52, after a four-mile race. He had covered a bout 37,000 miles running and had participated in some 20 marathons in the 17 years before his death.

Endurance athletes do not appear to lengthen their lives significantly through exercise, reaching only average life expectancy, if that. Jack Kelley won a bronze medal in the Olympics for his rowing and suffered the same fate as Fixx. He, too, died of a heart attack. Emil Zatopek, a famous world-class runner and multiple Olympic long-distance champion, died at the age of 78, the result of a stroke. A non-athlete could be expected to live just as long.

All these athletes were, in our eyes, extremely fit and capable. Despite their apparently healthy, body-conscious lifestyles, in many cases they did not reach even the average life expectancy. The frightening thing is that their daily athletic training does not appear to have given them any health benefits.

Especially noteworthy is the fact that these endurance athletes died of diseases that should actually have been prevented by their chosen sport. Generally, running is recommended as a protection from heart attack and stroke.

Exercise: It depends on the amount

‘The dose makes the poison’; even Hippocrates knew this. The saying appears to apply to athletic training as well. In recent literature, exercise is constantly cited as a protection against cancer.

This advice, however, appears to mean only moderate athletic activity. Intensive exercise does not seem to provide any health benefits in this arena. In fact, the risk of cancer probably increases as a result of intensive exercise. Dr Anthony P. Polednak proved, in a study of 8,400 Harvard graduates, that those who exercised intensively were more likely to die of tumours than were non-athletes.

Paffenbarger studied 50,000 Harvard graduates who exercised either more or less than 5 hours a week. In this study it became apparent that the subjects who exercised more were significantly more likely to contract prostate cancer.

The frequent cases of cancer among relatively young endurance athletes are thought-provoking. One man who had completed 524 marathons in his life — making him the world record-holder for the most completed marathons — died of cancer at the age of 60. In the meantime, more and more doctors are seeing a connection between overtraining and the development of cancer and other diseases.

Of course, these examples cannot conclusively prove that exercise promotes cancer. They do, however, show the dubious value of intensively practiced endurance sports and make it clear that you don’t have to do performance-orientated sports to protect your health.

We do need a certain, well-measured amount of movement to keep our organs functioning, to keep our immune system strong, and to be at optimal physical and mental capacity. Such an exercise program does not, however, have anything to do with performance-orientated fitness training and is miles away from being an extreme sport.

Numerous studies have shown that a certain amount of movement protects us from circulatory disease and is good for our health. But athletic exercise is not necessarily what we need. Even our everyday movement — that is, walking the dog, going shopping, climbing the stairs, and mowing the lawn — can be enough.

However, anyone who is missing this everyday exercise — for example because of a sedentary job — should have some kind of minimal exercise programme to follow regularly in order to balance it out. This will maintain your organ and muscle function and should, above all, contribute to your relaxation and not add another stress factor to your life. We recommend the following:

Our minimal program for fitness and longevity

The programme consists of:

-Or, alternatively, peripatetic meditation — a combined movement and relaxation programme.

-A ten- to 15-minute muscle-stretching session, which we recommend you do three times a week.

More time investment and more intensive training are not necessary for your health. From the perspective of the Metabolic Theory, this programme offers you the optimal requirements for a long and successful life. More exercise is simply unnecessary.