As the saying goes, if you want to change your life, first you need to change the way you think. Stop focusing on the negative, comparing yourself to others, gossiping and complaining. 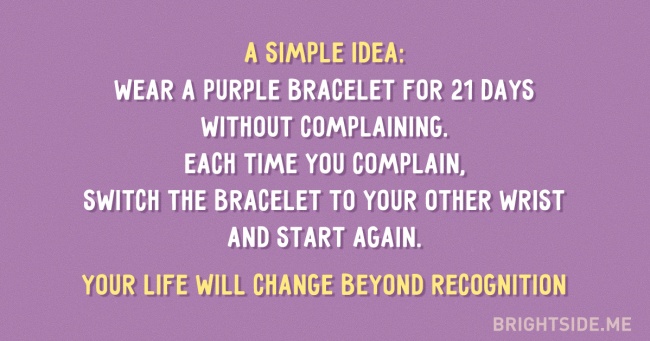 It seems easy enough, right? Moreover, a lot of people honestly believe that they’re the lucky ones who live by the rules of positive thinking and an optimistic attitude. If so, hey, well done! Keep doing what you’re doing! But if you’d like to check yourself — and, if necessary, sway your thinking in a more positive direction — try this one simple experiment. Will Bowen suggests wearing a purple bracelet for 21 days without complaining. Each time you complain, you have to switch the bracelet to your other wrist and start again from day 0.

According to psychologists, the color purple has an energizing effect on your brain, reduces anxiety and irritation, and 21 days is enough to make any new habit stick. Although if you don’t have a purple bracelet, a rubber band or another bracelet will suffice.

Bowen himself admitted that he only managed to clear 21 days only after three months of trying and slipping, and most people need from 5 to 6 months to achieve that. The first few weeks you have to switch wrists 10-20 times a day, which turns into once a day — which in a few months becomes a week. The method has proved to be so effective that millions of people all around the world have joined in.

During the bracelet-wearing period, people learn to notice positive things about both themselves and the world around them. And it turns out that life is not so bad, and we’re surrounded by a lot of really interesting and positive stuff. You have to make an effort to notice it at first, but little by little seeing the good around you becomes a deliberate choice, transforming everything for the better.

So ask yourself: would you be willing to try this experiment?