Men’s Fitness magazine recently published — and then deleted — an article titled“How To Turn A ‘No’ Into A ‘Yes.’” 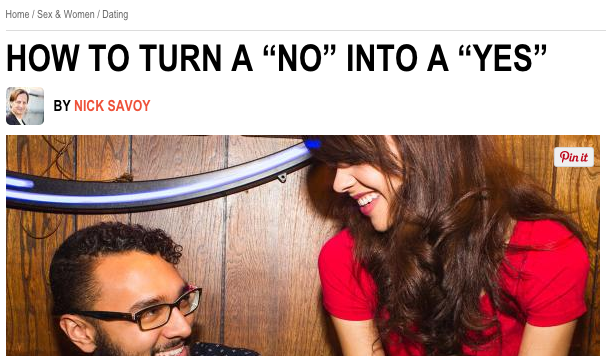 The feature, published online in America, has led to criticism because of its perceived promotion of rape culture.

Writer Aura Bogado spoke of her outrage in a tweet that has been shared more than 1,000 times in 24 hours.

She also says she’s been threatened with rape since sharing screengrabs of the article.

“Every guy gets rejected sometimes,” says dating expert Nick Savoy in the article. “Even the best dating coaches and pick-up artists in the world.

What separated the men from the boys is how you handle rejection – and how quickly you can turn things around.

A woman CLEARLY tells you she's not interested at a bar but "PLOW AHEAD ANYWAY." tf is this @LS_Savoy pic.twitter.com/0HoIqrE41W

Men’s Fitness has yet to comment on the article or its retraction but it has been pulled from its website.