Obama laid out a full military band and ceremonial guard on the South Lawn, making the recently elected prime minister the first Canadian leader in 20 years to receive an official-level visit.

After talks in the Oval Office and a Rose Garden press conference, Obama will host a state dinner, with guests that including Mike Myers, Ryan Reynolds, Michael J. Fox and Blake Lively. 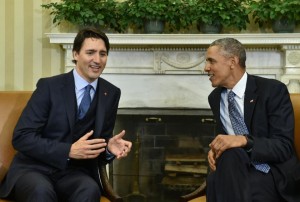 The 54-year-old Obama has saluted Trudeau, 44, as political and generational kin, an ideological colleague who shares a belief in the importance of issues like healthcare, gay rights and tackling climate change.

“He campaigned on a message of hope and of change,” said Obama, echoing his own 2008 campaign message. “From my perspective, what’s not to like.”

“Justin’s talent and concern for the Canadian people, and his appreciation of the vital role that Canada can play in the larger world is self-apparent.”

Obama’s effusive praise was met with an invitation to visit Ottawa later this summer and address the Canadian parliament.

“That’s a great honor,” said Obama. “I look forward to the opportunity to speak directly to the Canadian people about the extraordinary future that we can build together.”

In comments that were perhaps directed at Canadians who feel slightly ignored by their larger neighbor, Obama said the visit reflected “something we Americans don’t always say enough, and that is how much we value our great alliance and partnership with our friends up north.” 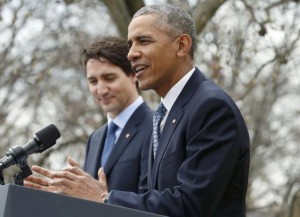 Trudeau also reciprocated Obama’s compliments, describing him as a “man of both tremendous heart and tremendous intellect.”

There was also some jovial ribbing, with Obama joking about national rivalries over whose beer is best and Canada’s national obsession, ice hockey.

“Where’s the Stanley Cup right now?” Obama teased. “I’m sorry, is it in my hometown with the Chicago Blackhawks?”

Trudeau hit back that the team’s trio of superstars — Patrick Sharp, Jonathan Toews and Duncan Keith — were among Canada’s greatest exports.

Early on Thursday, the White House announced that Canada had agreed to match an existing US target of reducing methane emissions by 40-45 percent below 2012 levels by 2025 from the oil and gas sector.

During former prime minister Stephen Harper’s long tenure, the environment had been a serious point of contention with Washington.

Harper had argued forcefully for building a new trans-border pipeline to carry Canadian crude through the United States, a plan that Obama ultimately vetoed.

Obama and Trudeau met as their country’s leaders for the first time at an Asia Pacific Economic Cooperation summit in Manila in November, a month after the Canadian won a general election.

Trudeau has refused to reconsider a campaign promise to pull Canadian jets out of Iraq and Syria.

But the two men put aside differences over Syria and the fight against the Islamic State group to joke about graying hair and trade compliments about their spouses and kids.

The warmth of the encounter triggered a flood of online jokes and tongue-in-cheek reports on a budding “bromance” between the leaders, as photos went viral showing them smiling like old buddies, or cooing over a photogenic baby on the South Lawn.