Long before the term “mansplaining” was coined — well, “long” is relative to the speed at which we consume things on the internet today — a British woman named Wendy Cope used the clumsy male habit of exhaustingly and unnecessarily explaining things to women as a subject of her poem 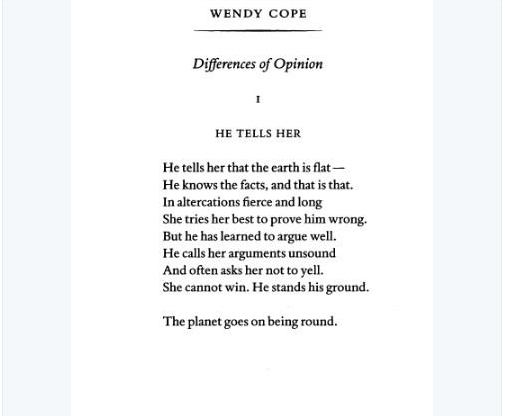 Of course, as could be expected from the internet, Felicity got some criticism for sharing the poem. One Twitter user even called it “sexism at it’s [sic] finest” — but Felicity just replied right back. And of course, the ensuing Twitter convo ended up just being another example of — you guessed it — mansplaining.

In a recent Pew survey, 56% of men reported that they think challenges that women face have “mostly been eliminated.” Meanwhile, 63% of women said they still think sexism exists.