Happy Birthday MAHENDRA BAHUBALI DHONI 💕 You Are An Inspiration For Millions Of Indians ❤ Thank You For Everything Mahi !! One Of Best Thing Happened To Indian As Well As World Cricket #HappyBirthdayMSDhoni #dhoni #msdhoni #dhonism #dhonibirthday @mahi7781 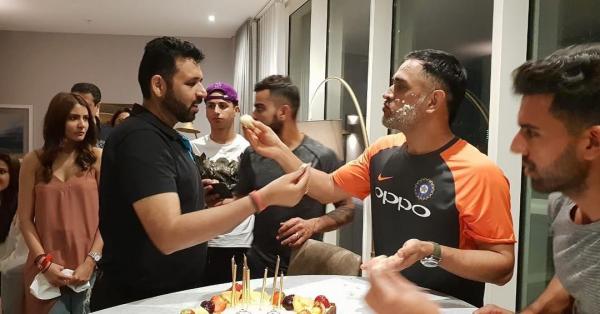 Additionally, if it is the birthday celebrations of the much celebrated and former Indian Cricket Team captain Mahendra Singh Dhoni, the fanfare just increases two folds. MS Dhoni turned 37 today, and from Virat and Anushka to daughter Ziva and wife Sakshi, everyone was present by Dhoni’s side for the celebrations. The team, however, refrained from smearing Dhoni’s face with cake this year.

SPECIAL: From his teammates to someone very very special, wishes galore for @msdhoni as he celebrates his 37th birthday. Watch it till the end – Cuteness Alert! #HappyBirthdayMSDhoni
LINK—->https://t.co/wT27zi4Bx1 pic.twitter.com/YPupnjLVwz

Dhoni achieved a significant milestone in the Cardiff T20I by becoming the third Indian cricketer to successfully complete 500 international matches. The other two players who have achieved the feat are Sachin Tendulkar and Rahul Dravid.

The Board of Control for Cricket in India later posted a video wherein all the players, led by captain Virat Kohli, wished him

Sui Dhaaga Review: The Varun-Anushka Starrer is Simple But Enjoyable