After leaving us speechless with his mind-blowing performance as Sartaj Singh in Netflix original series Sacred Games, the Nawab has been busy shooting for his upcoming movie Hunter which is being helmed by Navdeep Singh. The movie which is currently being filmed at Mumbai’s Filmistan Studio. And his look as Sadhu’s leaving us surprised yet again. 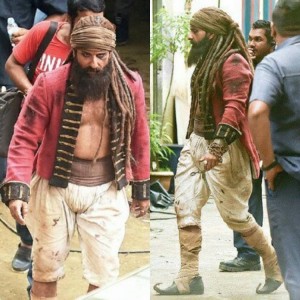 New Leaked pictures have now been carried in Mumbai Mirror wherein Saif is seen sporting long hair with a beard. A ragged red shirt and white dhoti completed his look and a bandana added to his attire. This rustic and raw avatar of Saif is sure to leave you gobsmacked. We had a hard time recognizing him, what about you? The film also stars R Madhavan and Sonakshi Sinha. Earlier too, a few pictures of Saif in the same look had hit the web. About the movie, a source revealed that “Saif has been shooting in a village called Desuri in Rajasthan (that is two hours away from Udaipur) for the yet-untitled Navdeep Singh film, which also stars R Madhavan and Sonakshi Sinha in key roles. As he is stationed in Udaipur, Bebo decided to pay him a visit with Taimur in tow.

10 Bollywood Divas Who Were Blamed for Breaking Marriages

After Sacred Games, Radhika Apte starrer web series Ghoul is all set to release in August