An old lady once lived in our apartment block. Her name was Mary. She was 97 years old. A kind-hearted lady who was always in a good mood, you never saw her without a smile on her face and a heartfelt greeting on her lips. To me, it always seemed that she knew something important which none of the rest of us did; she was somehow enlightened and calm. 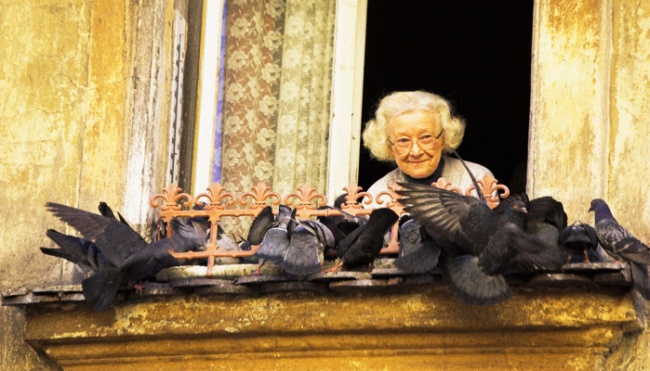 Once, Mary decorated the window ledges in our stairwell with flower pots. She made them look beautiful. But the next day someone had stolen the most attractive flowers she had put out. Near the entrance to the subway, I saw street vendors selling Mary’s flower pots.

In response, our neighbours arranged to place a lock and an entry phone at the entrance to our apartment block. Mary then decided to hang picture frames in the stairwell with inspirational quotes, as well as, once again, flower pots on the window sills. It was a really great idea which made the place feel much more homely.

For some reason, not long after we started getting groups of rowdy teenagers gathering on the stairs. Mary once went out and offered them some tea. They laughed at her, and deliberately wreaked her flower pots and broke the picture frames she’d put up.

The next day, Mary again put out some flowers, arranged the picture frames, and even placed some classic literature on the ledges. The teenagers turned up once again, and once more made a racket. Mary once more came out of her apartment and offered them tea. This time however, for some reason the young people didn’t refuse. They drank some tea with the old lady, and even left promising to read some of the books she’d put out. They didn’t touch the flowers or the picture frames.

The next day, Mary left out a plastic bottle full of water, so that anyone who had the wish to could water the flowers. She also left out more books for her neighbours to read. The kids turned up again in the evening, laughing and shouting and splashing each other with the water. Mary came out of her apartment, offered them some tea once again, and filled the bottle of water, asking them to water the flowers.

The kids started turning up each day on our stairwell. Some of the neighbours became fed up with it, even calling the police on one occasion. But Mary just told them that her ’pupils’ came to collect some books, and even offered them to the cops as well.

Soon, a bookcase appeared in our stairwell. A sign was left next to it: ’Hello! If you have any interesting books at home which you’ve already read, please share them here! Be good! And if you’ve borrowed a book from here, please return it so that others can enjoy it!’

The bookcase ended up being completely full of books. Flowers appeared on all the window ledges, and pictures hung on every wall next to the staircases. The lock on the front door to the apartment block disappeared. In the evenings, you could see teenagers sitting reading books on the stairs. Mary even left out torches to help them see the pages better. The stairwell of this ordinary apartment block was no longer a dark and threatening place.

One day, Mary passed away. In the basement of our apartment block, we opened a small youth club for local kids. It had a library, and flowers on the window sills.

Whenever I think of Mary, I am reminded that even the smallest acts of kindness from the most humble of people really can change the world around us.