India is a land of multitude culture and tradition and within the radius of 500 km the culture. It is amazing to see, that within the country there is a diversification of fashion and clothing which could be due to the weather condition and culture of the society. In Indian, we can explore different traditional dresses from different states. Arunachal Pradesh is the land of Diversity with over 26 tribes, Some favourites amongst all dresses include shawls, lungis, wraps and skirts. People who fall in love at first sight with colours and cultural diversity are the ones to enjoy this place the most. In Bihar, most of the people live in rural areas and not interested in wearing the newly advent modern costumes. Chhath Puja is the main festival in Bihar and celebrates it in large scale. During the festival period, the people of Bihar wear their traditional dresses and pray to God. The women of Chhattisgarh are known for wearing a saree known as the ‘Lugda’ in a Kacchhora style along with the blouse that is known as the ‘Polkha’. The lugdas can be found in one of three natural fabrics viz. linen, silk and cotton. These saress are often dyed in light, vibrant colors. Goan Catholics have unique culture, which is a mixture of Indian and Portuguese cultures. Portuguese came to Goa in 1510, and people of Goa adopted the culture of Portuguese but also kept following their traditions, customs and Hindu caste system. The Indo-Latin culture became famous for their outstanding clothing as well. The traditional Gujarati dresses for men include kediyu or kurta on the top and dhoti or chorno at the bottom. Women in Gujarat wear sarees or chaniya choli. Recently, they have started wearing salwar kameez as well. The handloom has risen to become the cultural identity of Himachal Pradesh. Costumes of Jammu and Kashmir are well known for their embroidery and intricate designs, which reflects the richness of the culture and landscape of the region Females can be seen wearing colorful, designed and well-maintained sarees. Women who belong to high-class background can go for dazzling collections of saris with a number of styles. Tussar silk sarees are made in Jharkhand, known for their elegancy and unique look. Tribal women wear Parthan and Panchi. The culture of Kerala is a synthesis of Aryan and Dravidian cultures, developed and mixed for centuries, under influences from other parts of India and abroad. 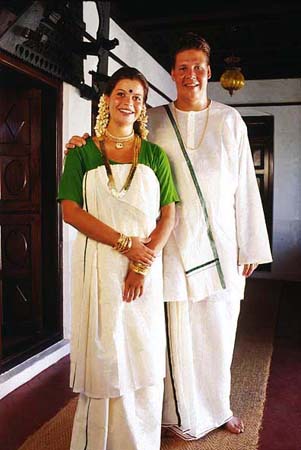 Marathi saints of Varakari religious movement which includes saints like Dnyaneshwar, Namdev, Chokhamela, Eknath and Tukaram which forms the one of base of culture of Maharashtra or Marathi culture Manipur “The Jewelled Land” is one of the seven sisters’ states of north eastern India. The state is blessed with scenic beauty of hills and valleys and also with the heritage of handloom and weaving. The traditional costumes of north eastern India are known for their colourful and vibrant attire. And Manipuri costumes hold no exception in standing out for their dynamic trends of clothing. The state has a very peaceful atmosphere and a serene environment to offer and is home to a number of tribes such as Garo, Khasi and Jaintia. It is rightly said that your culture is your brand and the people of the state of Mizoram take this saying too seriously with the kind of contribution they have made over the years in keeping the culture of their state alive via means of their dresses. Odisha has had a continuous tradition of dharmic religions especially Hinduism, Buddhism and Jainism. the Punjabi suit is the traditional dress of women in the Punjab region. It is made up of a kurta or kameez and a straight cut salwar. The People of Sikkim consist of three ethnic groups, that is, Lepcha, Bhutia and Nepali. The Garhwali culture can be primarily distinguished by the Garhwali language. Kumaoni people have their own Kumaoni language This legacy is the common heritage of both present-day West Bengal and Bangladesh where these traditional methods of curating beautiful weaves exist in curious harmony with the modern-day synonymity of the ‘fashionable’ with the western-wear. Presenting below are some of the traditional costumes of Bengal that would top the list of every collector and fashion and art enthusiasts: Bipasha & Karan’s Beach Vacay Is The Perfect Spot For Winters!