The channel is already facing a lot of criticism for airing unverified videos of JNU student leader Kanhaiya that led to his arrest and also polarising the debate on nationalism.

Now, in another such instance, Zee has taken a dig at a poetry symposium that has been organised in Delhi annually and has specifically targeted the renowned Indian scientist and poet Gauhar Raza. 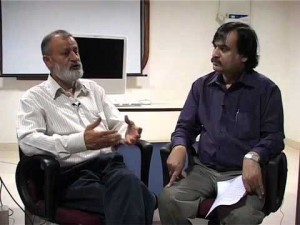 What is this new controversy?

On March 5th, Delhi’s Shankar Lall Hall hosted the prestigious Shankar-Shad Mushaira which is organised in memory of Urdu poets Shankar Lall and Murli Dhar. The poetry event was attended by a host of eminent poets from around the world including poets from Pakistan.

In a episode of the famous programme DNA hosted by Sudhir Chaudhary, the channel termed the symposium a meeting of “Afzal-Premi gang” (a gang of Afzal lovers). The channel also picked up a few chunks of the poem recited by Gauhar Raza and tried to explain how his words were against India and the government. He was further targeted because he apparently lent his voice of support for Kanhaiya and JNU students.

Here is the poem which Raza recited at the symposium. See for yourself whether it promotes anti-India sentiment.

And here’s how the channel reported it by misinterpreting his words:

It’s not the first time that something of this sort has happened. Ever since the channel aired the allegedly doctored footage of Kanhaiya, it has also led a campaign against students of JNU and termed the campus ‘a den of anti-national activities’. On 8 March, the channel played excerpts of political scientist Nivedita Menon’s speech at JNU and termed her anti-national.

Now, prominent personalities have raised their voices and have criticized the channel for violating media ethics specifically those instances where the channel has played a significant role in maligning individuals as ‘anti national’.

In a joint statement, they urged the Press Council of India and the Broadcast Association to take note of and initiate necessary action against the channel, reported the Hindu.

Here are a few excerpts from the statement:

Singling out of individuals and creating a mass-frenzy against them using the medium of TV is a dangerous trend. Zee TV initiated this defamatory exercise in the case of the students of the JNU also, and these doctored videos have become the basis of arrest and harassment of Kanhaiya, Umar and Anirban. They have not yet apologised for this highly irresponsible act.
That Zee News can continue to flout all ethical codes of journalistic conduct, and conduct this relentless tirade against Nivedita Menon and Gauhar Raza is criminal and unacceptable.