Amid a raging row at JNU, it has now emerged that its students’ union president Kanhaiya Kumar, who is facing sedition charge, was fined by the varsity administration last year for allegedly “misbehaving” with a girl student and “threatening” her.

The incident had occurred on June 10, 2015, when the girl student asked Kanhaiya, who at the time was not the students’ union president, to not urinate in the open inside the campus.

The girl, who now teaches at Delhi University, alleged that Kanhaiya “misbehaved” with her when she objected and also called her a “psychopath” while threatening her with dire consequences.

Following a complaint by her, the JNU administration held a proctorial inquiry that found Kanhaiya guilty.

“The university… has found Kanhaiya Kumar guilty of misbehaving with an ex-student (female) and threatening her. This act is serious in nature and unbecoming of a student of JNU and calls for a strict disciplinary action against him (Kanhaiya)… keeping his career prospects in mind, the Vice Chancellor has taken a lenient view in the matter,” said the office order issued on October 16, 2015 by the then Chief Proctor, Krishna Kumar.

“Kanhaiya is fined Rs 3,000 and also warned to be careful and not get involved in any such incidents in future. Otherwise, strict disciplinary action will be taken against him,” the order said.

hile an unsigned order was shared on social media by the girl, who accused Kanhaiya of being a “false revolutionary making claims about upholding the dignity of women”, the university administration confirmed in a statement that the letter was authentic and action was taken against the student leader. 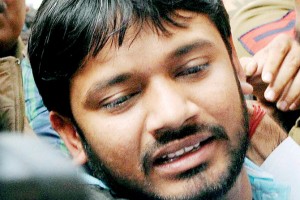 “I am dejected and pained to see how my JNU community has ganged up to create false revolutionary. I want to ask, do you really understand the D for Dignity of a female, Mr Kanhaiya? “Unzipping your private part in public and urinating on road are these your revolutionary tools to uphold a female’s dignity? I am shocked to see how a misogynist like Kanhaiya is being hailed as revolutionary,” she said in an open letter that is circulating online.