Telling your child to hug or kiss a family friend or relative might seem like an innocent thing to do, but as this controversial meme points out, it could actually be giving your kids a dangerous message about the rules of consent.

“I am 5,” reads the meme’s message. “My body is my body. Don’t force me to kiss or hug.” It was posted on A Might Girl’s Facebook page alongside excerpts from an article titled “I don’t own my child’s body,” written by CNN writer and producer Katia Hetter. In it she argues that encouraging children to submit to unwanted affection is actually teaching them that their bodies do not belong to them, and that forcing them to touch people they don’t want to could actually leave them vulnerable to sexual abusers. The post has since been liked more than 88k times and shared by over 162k people. It’s also started a dialogue on what parents should and shouldn’t be teaching their children. What do you think? Let us know in the comments below. 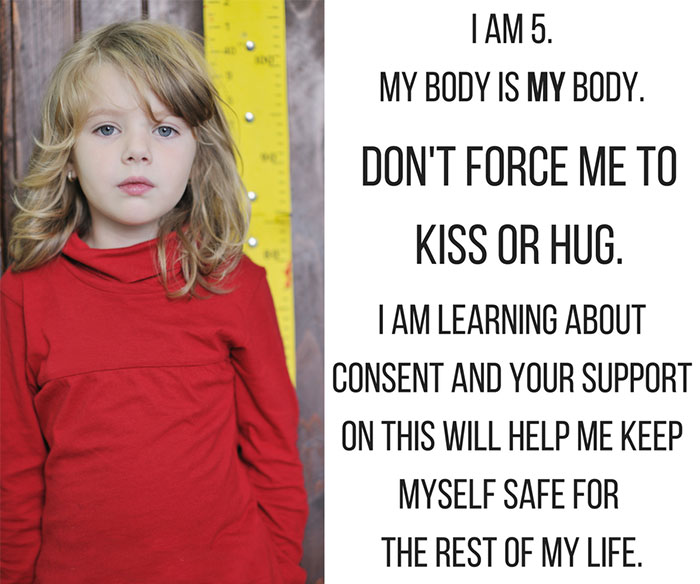 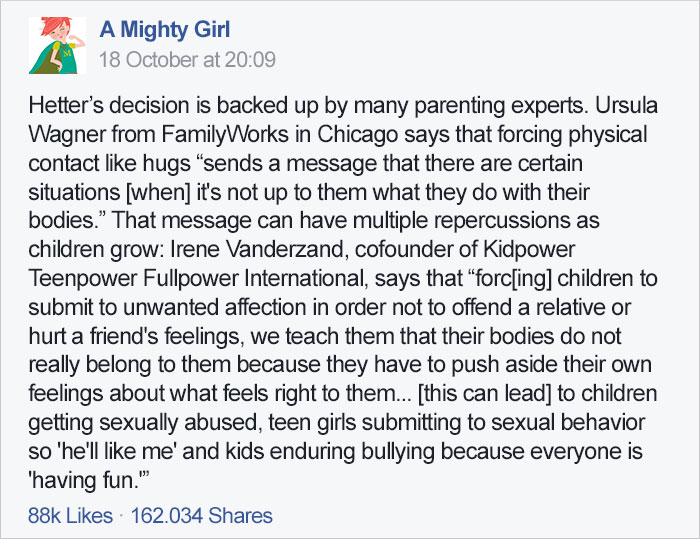 Katia Hetter taught her daughter an important lesson with a very simple phrase: “I would like you to hug Grandma, but I won’t make you do it.” Her then four-year-old daughter was going on what she describes as “a hugging and kissing strike” — parents might receive a hug, but even close family would not. Hetter felt it provided a good opportunity to teach her daughter “that it’s OK to say no to an adult who lays a hand on her — even a seemingly friendly hand.” As she explained, “I figure her body is actually hers, not mine. It doesn’t belong to her parents, preschool teacher, dance teacher or soccer coach. While she must treat people with respect, she doesn’t have to offer physical affection to please them. And the earlier she learns ownership of herself and responsibility for her body, the better for her.”

Hetter’s decision is backed up by many parenting experts. Ursula Wagner from FamilyWorks in Chicago says that forcing physical contact like hugs “sends a message that there are certain situations [when] it’s not up to them what they do with their bodies.” That message can have multiple repercussions as children grow: Irene Vanderzand, cofounder of Kidpower Teenpower Fullpower International, says that “forc[ing] children to submit to unwanted affection in order not to offend a relative or hurt a friend’s feelings, we teach them that their bodies do not really belong to them because they have to push aside their own feelings about what feels right to them… [this can lead] to children getting sexually abused, teen girls submitting to sexual behavior so ‘he’ll like me’ and kids enduring bullying because everyone is ‘having fun.’”

Hetter also points out that allowing children to refuse hugs does not mean allowing them to be rude: “She has to be polite when greeting people, whether she knows them or not. When family and friends greet us, I give her the option of ‘a hug or a high-five.’ Since she’s been watching adults greet each other with a handshake, she sometimes offers that option.” Hetter explains to family members “why we’re letting her decide who she touches.” And, as she’s already observed, there is one additional benefit to letting her daughter lead the way when it comes to physical contact: “When my child cuddled up to my mother on the sofa recently, happily talking to her about stories and socks and toes and other things, my mother’s face lit up. She knew it was real.”